Reducing the Risk of 3D Printer Fumes in the Workplace 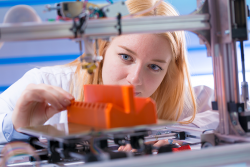 With the advent of lower costs, many workplaces and educational establishments are investing in 3D printers, but most are unaware of the risks associated with the potentially hazardous fumes emitted affecting employees and students.

3D printing is a modern technology that has been revolutionary in many industries such as healthcare, engineering, aerospace, architecture, design, fashion and more; completely transforming design, prototyping and concept visualisation processes.

With technologies becoming more available, the development of low-cost desktop 3D printers has made them commonplace in the workplace and in educational environments such as schools, colleges and universities.

However, what many don’t know is that 3D printers create emissions containing chemicals such as styrene and isocyanates which are harmful to health. In order to protect users and adhere to legal obligations, these substances need to be controlled through full enclosure of the printer and installation of an extraction system.

Find out more about controlling the risks whilst 3D printers are in operation in your classroom or workplace.

The Dangers of 3D Printers in the Workplace

Findings from independent studies have found that ultrafine particles (UFP) of <100 nm diameter are emitted during the operation of office equipment that consumes thermoplastic toner powder.

Further research from HSE has suggested that these particles are created by 3D printers as the filament is pushed through the nozzle.  These ultrafine particles can cause lung and cardiovascular disease.

Despite this, appropriate ventilation is not often present, leaving these ultrafine particles to be spread across the room. Furthermore, desktop 3D printers are often situated in close proximity to where students and employees work.

With the basic models of 3D printers used in most workplaces and schools taking a few hours to print even simple designs, students or employees may be inhaling these ultrafine particles for an extended period of time whilst the printer is operational.

As 3D printing has become more popular, higher emphasis has been given to safety concerns associated with the technology. For educational environments, the issue was recently brought to light by HSE and CLEAPSS, who co-published a guide on managing the risks posed by 3D printers in schools and colleges.

However, it is still generally the case that manufacturer’s instructions on the use of their 3D printers, filaments and associated equipment do not include detailed information on safety and the importance of controlling fumes.

Responsible persons should ensure they put in appropriate measures to control 3D printing fumes to meet HSE requirements and ensure that student and employee health is not impacted. There are several methods of controlling the fumes given off by 3D printers:

Extraction is the most efficient method of reducing the risks posed by 3D printing fumes.

During recent testing by HSE, it was found that placing a 3D printer within an enclosed hood with a proper ventilation system reduced particle emission by up to 97% when exhausting air from the enclosing hood and by 99% when in recirculating air mode.

A Local Exhaust Ventilation (LEV) system can be used to effectively and safely remove fumes AND particles emitted during the operation of a 3D printer.

The Choice of Filament can be Crucial to Safety

As well as taking into consideration the toxicity of fumes given off by individual types of filament, ensure that the right type of filament is being used for the printer and that the filament is purchased from a reputable and trusted company.

Are you concerned about 3D printing fumes in your workplace?

A Local Exhaust Ventilation (LEV) system is the most effective method of preventing risk – with up to 99% reduction in particle emission during HSE tests.

Vent-Tech offers an end to end LEV service, from initial design and installation to ongoing testing and regular servicing to ensure that your LEV is suitable for your environment and ongoing needs. For more information, call one of our team today on 0117 964 7945 or fill out a contact form and we’ll get back to you.