It was announced yesterday that Adrian Sims (Vent-Tech’s Managing Director) has won the ‘Plant Engineer of the Year’ award from the Society of Operational Engineers.

Aimed at recognising the important work done by plant engineers, this award celebrates an individual who has made an outstanding contribution to any aspects of plant, works, services, maintenance, or facilities engineering.  Entries were judged by SOE staff and members of the IPlantE Professional Sector Council. 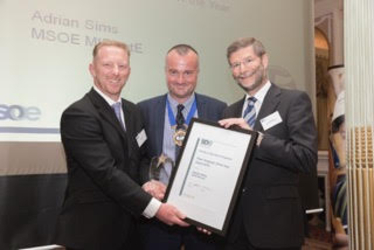 ‘I am delighted that the Society of Operational Engineers has given me this award. As a company Vent-Tech sets itself extremely high standards for all the projects we undertake, so to be recognised in this way is fantastic.  Vent-Tech is also committed not only to ensuring the systems that we design and install protect people properly but also to raising awareness of LEV in the wider industry to help reduce occupational exposure to harmful substances’

Adrian received his award at the Society of Engineers annual lunch at the RAC Club in London and also receives £500 of CPD sponsorship.

This award follows on from Adrian being awarded Chartered Engineer status at the end of last month. He will also be giving a talk to the Society of Operational Engineers about LEV Design on 22nd October on the SS Great Britain.